Asilah Morocco has found its niche as a bijou resort town. Affluent Moroccans, the government, and Europeans have poured money into gentrifying houses within the city walls, and the town hosts a sophisticated annual cultural festival.

A little further north along the beaches, camping resorts have mushroomed to cater to legions of European summer holidaymakers. Other than the medina, the beaches to the north of town are the main attraction of Asilah. The whole service industry has grown up to cater to the needs of visitors, with camping grounds, restaurants, discos, and the like.

Despite the changes mass tourism has brought, it is worth staying in Asilah for a while, especially in the low season, when there are hardly any tourists around.

Where is Asilah Morocco Located

Forty-five kilometers south of Tangiers along the road to Rabat there lies the amazing city of Asilah. Just somewhat off the principal road and fair on the shore, Asilah is almost the picture-postcard Ramparts & Medina, complete with a stunning kasbah, and superb beaches.

Must Read:  Traveling to Morocco | Where is Morocco located?

The port of Asilah lies 46km south of Tangier. Small it may be, but for over two millennia it has had a tumultuous history, far out of proportion to its size.

The first settlers were the Carthaginians, who named the port Zilis. Next were the Romans. Forced to deal with a population that had backed the wrong side during the Punic Wars, Rome decided to move the inhabitants to Spain and replace them with Iberians.

Asilah Morocco featured again in the 10th century when it held Norman raiders from Sicily at bay. In the following century, it became the last refuge of the Idrissids.

The town’s most turbulent period, however, followed the Christian victories over the forces of Islam on the Iberian peninsula in the 14th and 15th centuries. In 1471 it was captured by the Portuguese, and the walls around the city date from this period, although they have been repaired from time to time.

Asilah was captured by the Moroccans in 1589, lost again to the Spanish, and then was recaptured by Moulay Ismail in 1691. In the 19th century, as a result of pirate attacks on its shipping, Spain sent in the navy to bombard the town. Early in the 20th century, Asilah was used as a base by Er-Raissouli, one of the most colorful bandits ever produced by the wild Rif Mountains.

Must Read:   When Is The Best Time To Visit Morocco? | Full Weather Info

Best things to do in Asilah Morocco

The impressive 15th-century Portuguese ramparts are largely intact, partly as a result of modern restoration work. Access is limited since many private houses abut them. Of the two prongs that jut out into the ocean, only the southwestern one can be visited. It affords great views, providing plenty of photographic opportunities.

The bright Asilah medina is worth a wander, though it’s a little sanitized for some tastes. The streets gleam with whitewash, ornate wrought iron adorns windows and there’s the occasional Moroccan craft shop or workshop. You’ll notice a lot of cheery murals on many of the houses. These are painted during the International Cultural Festival.

There are a few old cannons left just inside the seaward wall in Asilah Morocco. However, you can only see them from a distance, as access has been cut off by another thick wall.

The ancient and little-understood Monoliths of M’Soura stand on a desolate patch of ground some 25km (by road) southeast of Asilah. The stones, arranged in a circle, ranging from 50cm to 6m in height, and some historians believe they surround the tomb of a noble, perhaps dating back to Punic times.

To get to the site you must first reach the village of Souq Tnine de Sidi el-Yamani, off-highway P37, which branches east off the main Tangier to Rabat road. From here, 6km of bad piste (unsealed track) leads north to the site. You need a good vehicle, and a local guide would help.

The area just north of Asilah is a popular spot for wintering birds, including huge populations of common cranes (up to 1000 have been reported at one time)! Also a good number of birds of prey, including black kites, lesser kestrels, and, particularly, the great bustard. They often can be spotted from the main road around Briex and the Mohammed Bridge, about 10km north of Asilah.

Must Read:  15 Best Cities to Visit in Morocco

Asilah has stunning and amazing beaches plunged into the sea in numerous places. The best is Tahdart situated on the Road of Tangier 15 kilometers from Asilah, Paradise Beach, located 2 kilometers south of the medina. Further south of Asilah at 10 kilometers located the magic beach in the north of Morocco “Rmilat beach” but is difficult to access to it, marvelous, Clean and splendid, it’s a superb place for taking a sunbath, or even riding a camel along the beach. There are other wonderful Sauvage “wild” beaches around Asilah that can be reached by taxi car or horse-drawn carriage but I can’t suggest it for you.

This beautiful gallery space and conference center form the focus of the annual International Cultural Festival. Artists, musicians, and performers from across the world have displayed, played, demonstrated, and congregated here, between mid-July and mid-August, since 1978. The Spanish and Islamic talent is strong, and numerous workshops and public art demonstrations take place. A three-day horse festival (including a Moroccan fantasia or musket-firing cavalry charge) takes place towards the end of the festival.

For the rest of the year, a revolving exhibition of international painting and sculpture is housed in the center’s gallery and in the nearby El-Kamra Tower, a renovated Portuguese fortification on Place Abdellah Guennoun.

Places to Stay in Asilah Morocco

Accommodation is a little uninspiring in Asilah. During the high season (July to September) the town is flooded with visitors and you can expect hotels to hike up their rates.

There are a number of well-equipped camping grounds along the beach north of town. The first two you come across, a few hundred meters north of town, are among the best, though the toilet and washing facilities are still a little basic. L’Océan, Atlas and Hôtel Sahara. They all have guarded camping facilities, shower and toilet blocks, and restaurants and bars.

There are great hotels to stay in if you have a little spare cash, the popular and stylish one is Hotel Marhaba, Hotel Zelis has a good view from the front rooms, Hotel al-Khaima 3 stars, has a nice garden, pool, restaurant…

Homes Though many people have bought houses in the Asilah medina and converted them into holiday Riads, finding one of these places to rent is not easy, despite what faux guides may tell you. However, a few legitimate companies do operate and can offer good deals for long stays and in the low season. Book well in advance if you are coming in season.

Café Tanger (52 Ave Mohammed V) is a good place for coffee, fruit juice, and toast in the morning. It’s a clean and comfortable one in Asilah Morocco, and in summer it has an air-con.

For main meals, the cheapest option is the string of restaurants and cafés by the Asilah medina wall on Ave Hassan II. They’re simple, pretty basic places specializing in fish dishes. Main courses, such as fish tajine, brochettes and paella cost around Dh30. Restaurant Rabie and Al-Khouzama are two of the better ones, but you could pick any one of a dozen.

Slightly more expensive, but much more civilized, are the Spanish restaurants of Restaurante Oceano Casa Pepe, across from Bab Kasaba, and the livelier Casa García. There are both specialize in Spanish-style fish dishes, from octopus and eels to shrimps and barnacles.

How to get to Asilah

Cheaper non-CTM buses to Tangier and Casablanca leave roughly every half hour, from 6.30am to 8pm. A number of southbound services (both CTM and non-CTM) stop at Larache, and there are also plenty of non-CTM services to Meknès, Fès, Tetouan, and Ouezzane.

Train This is an inconvenient way to get to Asilah Morocco. As the station is 2km north of town, but it’s possible to catch one of many daily services to Tangier, or four southbound services to Fez, Casablanca, and Marrakech; which may require a change of train at Sidi Kacem. From Casablanca to Tangier the high-speed train (al Boraq) takes just 2h10, it’s the best way to get to Tangier but didn’t stop in Asilah.

Taxi Grands taxis to Tangier (Dh25) and Larache (Dh25) depart when full from Ave Moulay Ismail, across from the mosque.

To/From the Airport Tangier’s airport is only 26km north of here, so taking a taxi from Asilah (Dh200) may save you spending a lot of time and energy in Tangier. 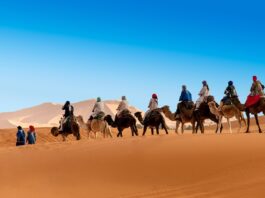 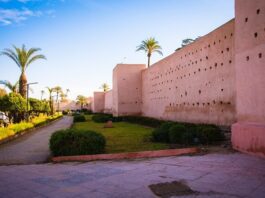 Best Things to See and Do In Meknes, Morocco 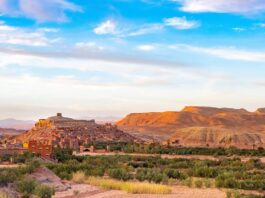 ABOUT US
Hi, welcome to The Morocco Travel Way, a Morocco travel guide and blog! by Sonia Hoster for lovers of travel, food and adventure in Morocco.
Looking for travel inspiration, culinary encounters, culture and adventure in Morocco? You’ll find all this on The Morocco Travel Way with travel guides and tips to help you make the most of every trip.
Contact us: [email protected]
FOLLOW US
© COPYRIGHT 2020 MOROCCO TRAVEL WAY. ALL RIGHTS RESERVED.